Paleoindians – the earliest well-documented indigenous peoples of the Americas – arrive at the Harpeth River near Old Town.

Mississippian culture emerges at Cahokia Mounds in southern Illinois – the largest Precolumbian city north of Mexico, and one of America’s World Heritage Sites recognized by the United Nations.

Mississippian culture develops in Middle Tennessee – and possibly the beginnings of the Native settlement at Old Town.

The Mississippian social and political center at Old Town reaches its peak of occupation. 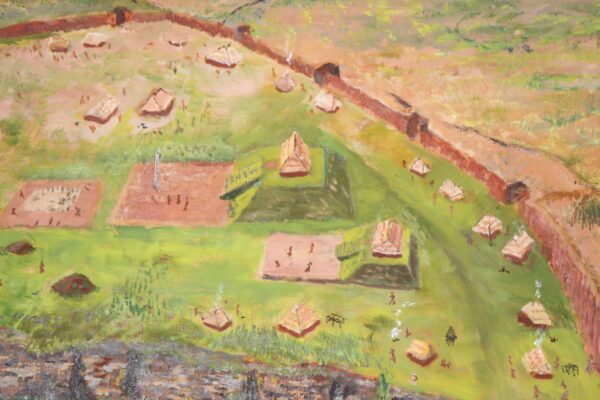 Nashville’s Mississippian peoples created a unique form of grave to house their honored dead – the stone-box grave. Since the first historic settlement of Nashville in 1779, literally tens of thousands of stone-box graves have been uncovered by plowing, construction, and “digging”.

Old Town abandoned by Mississippians Native Peoples, driven out by the social and political disruptions following the megadroughts. The Mississippian way of life continues well into the 1600s in places like East Tennessee and with the Natchez in Mississippi into the early 1700s.

Nashville is settled by James Robertson, John Donelson, and a party of Overmountain Men on Christmas Day, 1779. It was named for Francis Nash, the American Revolutionary War hero.

In 1780 John Donelson, Sr. became one of more than 200 settlers to sign the “Cumberland Compact,” and was granted a land tract that included the Old Town plantation. The name “Old Town” was recorded on these early maps, in recognition of the knowledge that for centuries, and “old town” had existed.

Williamson County, Tennessee, which contains Natchez Trace and Old Town was once part of Davidson County, but in 1799 became its own entity.

U.S. Congress passes legislation to establish a major post road between Nashville and Natchez, Mississippi.  Following a treaty on October 24, 1801 with first the Chickasaw Indians and then a few weeks later the Choctaws, substantial road improvements and construction of dry-stacked stone bridges began and were completed in 1802. 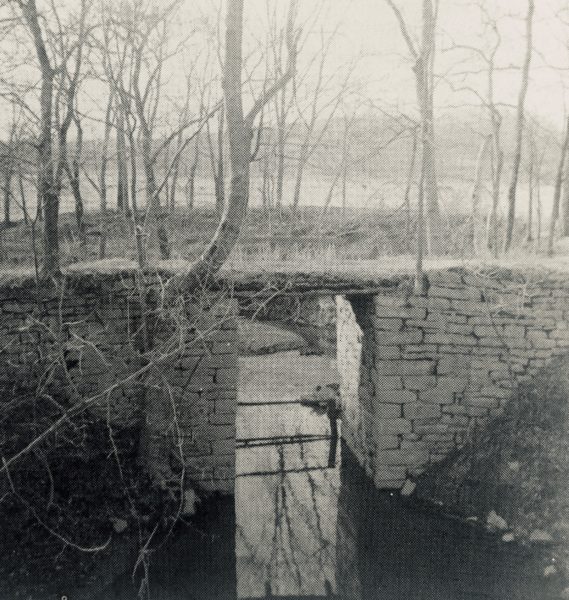 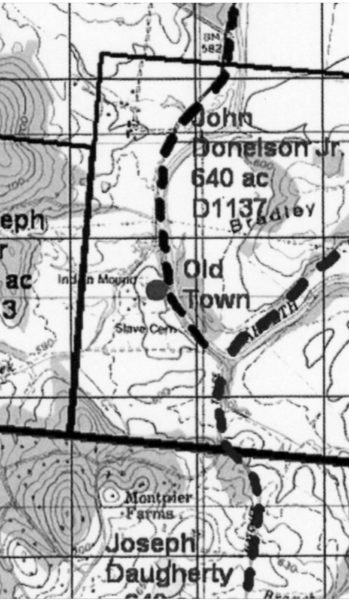 Earliest known written use of the term “Old Town” comes from a land warrant issued on February 15, 1803 — which reads in part “on big Harpeth adjoining John Donelson’s tract of 640 (that includes a part of the old town).”

The City of Nashville is incorporated by the state’s General Assembly.

Andrew Jackson and his troops crossed the Old Town Bridge on the way back from the Battle of New Orleans. This bridge along the Natchez Trace became the main passageway for travel southwest from Nashville.

This treaty recognized the cession of roughly six million acres of Chickasaw land in southwestern Tennessee and northern and western Alabama to the United States.

The Chickasaw Treaty of 1818

This treaty, also known as Jackson’s Purchase to the Chickasaw people, witnessed the Chickasaws accepting $20,000 per year for 15 years and the U.S. government agreeing to pay off certain debts. This treaty (and the 1816 Treaty of the Council House) established the requirement that Chickasaws receive cash, not goods, in exchange for their land. 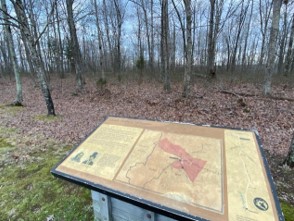 In 1830, Congress passed President Andrew Jackson’s Indian Removal Act, authorizing the President to negotiate removal treaties with Indian tribes living in the eastern United States. The Cherokee Nation resisted and fought back to no avail. By 1838 the last group of Cherokees left Tennessee by steamboat on the Hiwassee River. 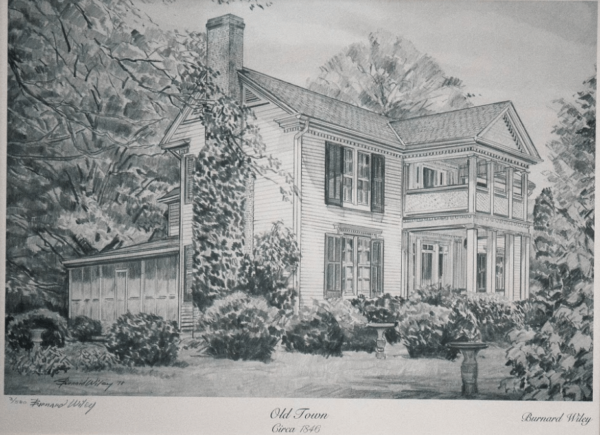 The Brown family sought to help the Confederate Army during the war, and Old Town was touched by the war with the nearby Battle of Franklin in 1864. The eldest son of Thomas Brown, the original owner, served in the First Tennessee Regiment and later in Coleman’s Scouts.

Battle of Franklin, November 30th, 1864 – the Browns at Old Town could hear the booming cannons and the rattle of musketry, while wounded and straggling troops retreated along the Natchez Trace 50 yards from their home. The devastating defeat of Gen. John Bell Hood’s Confederate troops in an ill-fated charge at Franklin resulted in the loss of more than 6,000 Confederates, more than 2,000 Union soldiers, along with six generals and many other top commanders. More Confederate generals were killed at Franklin than in any other battle in the war. The Confederate charge at Franklin was larger, longer, and deadlier than Pickett’s Charge at Gettysburg.

Thomas Brown refuses to sign the Oath of Allegiance after Nashville fell to the Union army and was subsequently imprisoned.

First archaeological excavation at Old Town conducted by Dr. Joseph Jones, the first City Health Officer for Nashville. Jones recorded the site consisted of two “pyramidal” mounds, a circular “burial” mound, and an additional mound on which the mansion stood.

Thomas Brown, Sr. dies, owning 546 acres of land including the Old Town homeplace. Before he died, Mr. Brown divided his property into tracts which were written on pieces of paper and drawn from a hat by his surviving four children (Jennie, Bethenia, John Thomas, and Maggie). His son John Thomas drew the homeplace, but because his work was in Nashville, he swapped tracts with his sister Bethenia Brown Miller.

Franklin explorer Dr. William Martin Clark investigated Old Town on behalf of the Smithsonian Institution to help gather evidence to dispel the myth of the “Tennessee pygmies” and to gather collections for the United States Centennial celebration.

Findings from Joseph Jones’ first archaeological excavation at Old Town were published on January 1, 1876, by the Smithsonian Institution as “Explorations of the Aboriginal Remains of Tennessee”, as part of the United States Centennial celebration.

Edwin Curtiss, working for the Peabody Museum of Archaeology and Ethnology at Harvard University, conducted a brief exploration at Old Town in October of 1878. After uncovering six stone-box graves along the side of the road, he stopped noting the graves had been damaged by wagon traffic. The only artifact recovered was a ceramic earspool.

Thomas and Margaret Brown’s daughter Maggie marries and moves to Franklin with her husband; Margaret moves with her.

Old Town Bridge of 1801 goes out of use, replaced by nearby newer construction.

Jesse Walter Fewkes, chief of the Bureau of American Ethnology of the Smithsonian, visited Old Town on his tour of local archaeological sites.

William Glass Polk examines approximately 80 stone-box graves from a cemetery located near the junction of the Harpeth River and Brown’s Creek at Old Town. Polk describes several funerary offerings and a variety of burials, including one particularly large stone-box burial measuring 7×2.5 feet containing two bodies, one male and one female.

Major flood in region washed out nearby Union Covered Bridge at Ash Grove.

Virginia Goodpasture plants daffodils (buttercups) along the Old Natchez Trace and in the Old Town yard. 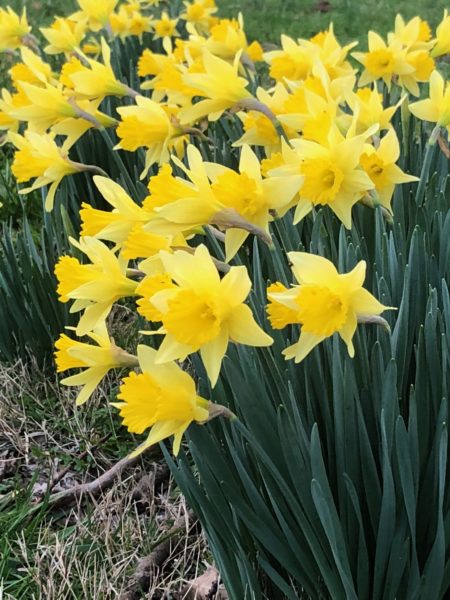 Contemporary Old Natchez Trace bridge, located 20 yards from the original 1801 Bridge, collapses under the weight of a huge oil truck, and while it is being rebuilt the adjacent 155-year-old Old Town bridge bears the burden of traffic again.

Old Town Bridge of 1801 is washed out by a major flood, but stone bulwarks remain. Exact date is unknown, but it likely happened in 1975 when the Harpeth River reached 33.7′, which was 12.7′ above the flood stage at that time.

The Goodpastures sell Old Town to Patrick and Catherine Cooper.

Franklin resident William Glass Polk’s collection of over 30,000 artifacts are donated to the Tennessee State Museum by his widow Mary, many of which are likely from Old Town but no inventory existed at the time of donation.

Laura Turner has been a beloved mainstay at Old Town, visiting daily for almost 40 years, nurturing animals and people at each occasion.

During installation of a waterline within the road right-of-way at the entrance to Old Town, a number of stone-box graves and portions of a burned Mississippian structure were documented by archaeologists from the Tennessee Division of Archaeology. 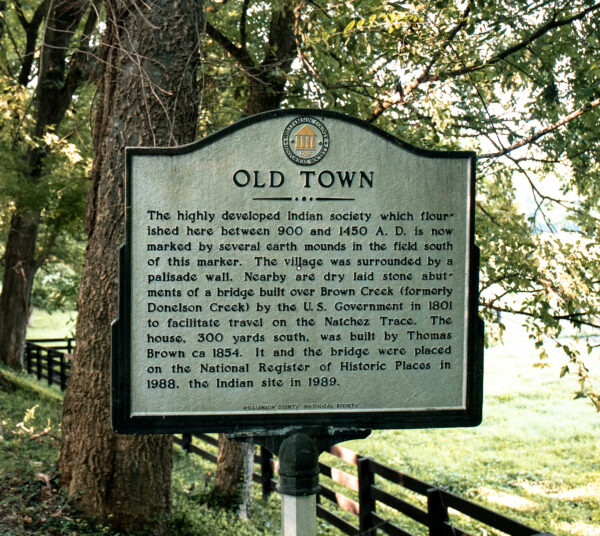 The Coopers sell Old Town to Jimmy and Jane Buffett. The Buffets continue active preservation of the home and smokehouse at Old Town. They move a large early 1800s, dog-trot log cabin from northern Alabama to Old Town. 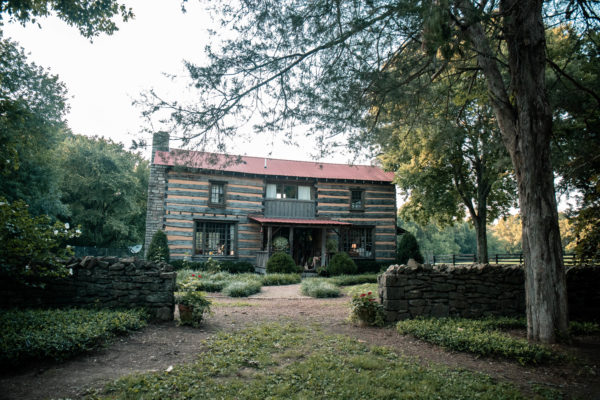 During renovations to the rear of the Thomas Brown House by Jimmy Buffett, archaeologists from the Tennessee Division of Archaeology documented a large Mississippian pit feature and one stone-box grave. This salvage archaeology project yielded the only current radiocarbon date from the prehistoric site – about A.D. 1250.

The 2010 Tennessee floods were 1,000-year floods in Middle and West Tennessee. The Harpeth River was one of the hardest hit with waters rising up to 21 feet. The catastrophic flood recorded a record 13.57 inches of rainfall during a 36-hour period. The combined two-day rainfall total doubled the previous 48-hour rainfall record in Nashville.

In 2014, at the request of the Cromlings and in advance of planned work on Old Natchez Trace, New South Associates conducted a GPR survey of Old Natchez Trace and the land adjacent to the road, totaling approximately 1.15 acres. GPR results detected 211 total anomalies and 182 anomalies with characteristics suggestive of graves. The results indicated a number of precontact features and that the site continues underneath the present-day road.

The Cromlings bring in the Dry Stone Conservancy to restore the north abutment of the 1801 Bridge. A perpetual easement was established with the Preservation Trust of Tennessee. 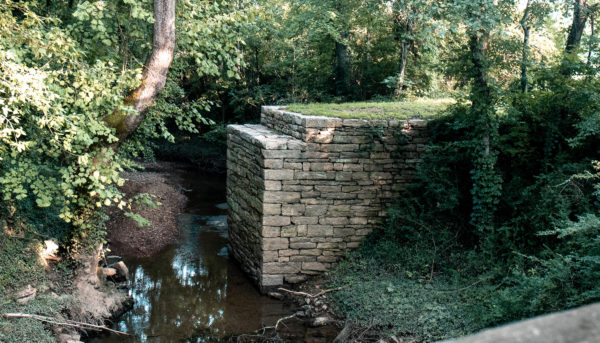 Tracy and Bill Frist purchase Old Town from the Cromlings, with a commitment to continue the legacy of preservation and conservation of the Cromlings.

Tracy and Bill Frist begin the Old Town Heritage Project in partnership with Middle Tennessee State University and Professor Kevin Smith to add to the growing body of knowledge of what is today known about ancient civilizations in Middle Tennessee.

Purchased in 2016, the Milking Barn was hidden beneath years of overgrowth. As we began to peel back the many layers of vines, a diamond in the rough was revealed. Structural repairs began in the summer of 2017. The front parlor was remolded in 2020 and fitted for a wood shop to be used by Yosely Pereira, an artist and woodworker originally from Cuba. 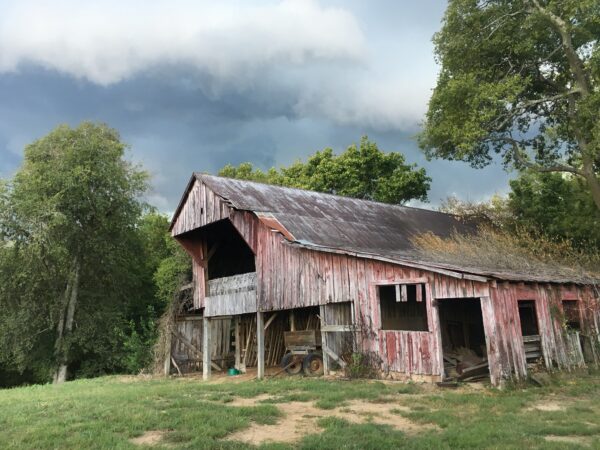 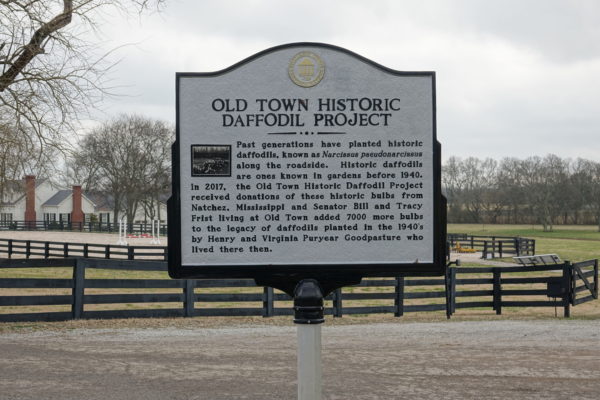 The Frists restore the Thomas Brown House with careful attention to historic accuracy.

In July 2020, Old Town welcomed the Tennessee Urban Forestry Council (TUFC) as they inspected and certified over 40 different species of trees throughout the property, hence the creation of the Old Town Arboretum. The arboretum today includes over 75 different species and has been granted a Level 2 certification from the TUFC. 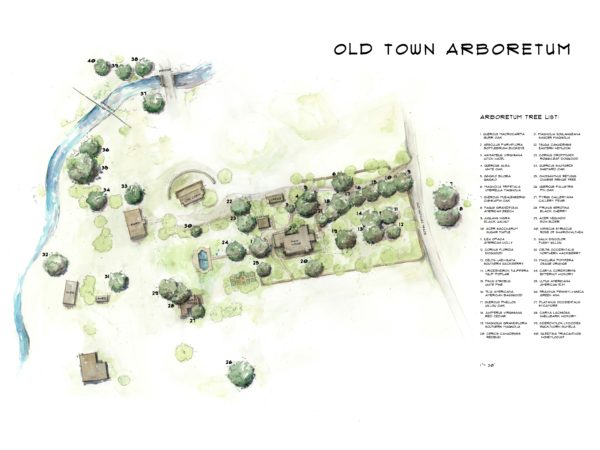 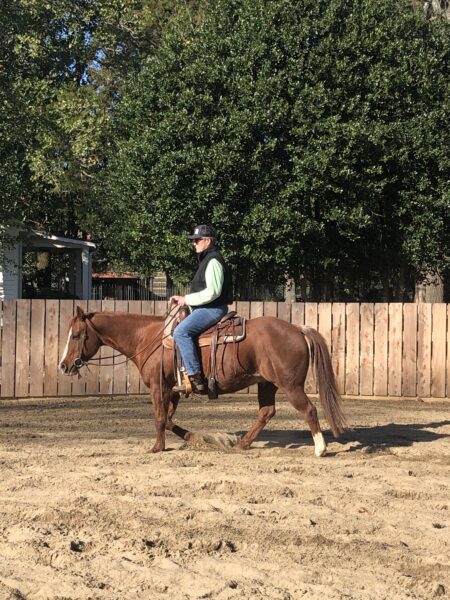 Old Town is the home to Sinking Creek Cutting Horses, LLC. Tracy oversees breeding and training (and shows regularly), continuing for 40 years a line of cutting horses originating with her own Sadie.

The cutting horse Arena was built in the summer of 2020. It is a replica of the one located at the Frist’s Farm, Sinking Creek, designed and built (literally, by her hands with Rodney) by Tracy. The Arena is constructed of cedar and is built to withstand the test of time. With the large viewing stand, guests come and enjoy our horses working and learn all about cutting horses.

The Horse Barn is our most recent build, taking shape in the summer of 2021. It is a mirror image of the main body of the Milking Barn. Built with features such as a large hay loft, a wash rack, stalls, grooming areas, a large spacious tack room, and a great feed room stocked full to keep all the animals fed year-round. Out back of this barn, you will find two new pastures with lush green grass and some new bur oak trees that will provide shade in years to come. 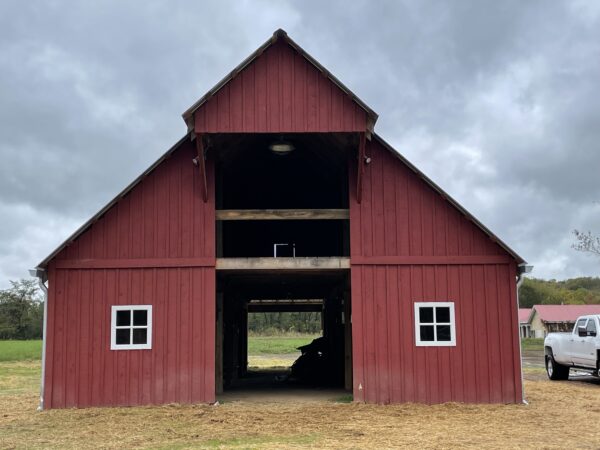